This was a campaign setting that my brother started back in '77, and which I took over later when he gave up the hobby. The map was taken from the old SPI generic war-game Strategy 1, and the central conflict was between the invading armies of the sorceress Oktvabrina of Ostoslavia, and the heroic defenders of the Lion Empire. Though there were a lot of dungeons involved as well.

The systems started out with all or the original D&D books up to Eldritch Wizardry, plus Metamorphosis Alpha; but there was a lot of major system revision going on at that time. Some character classes (Alchemist, Bard) and add-ons (social standing) were gleand from The Strategic Review and early issues of the Dragon. MetAlpha (as it was known) is also responsible for the presence amongs the original campaign notes of stats for the original X-Men, Avengers and other similar characters who I shan't transcribe here, plus stats for the Zcarab from the Roger Dean poster.

The system is a binary, a G-class primary (Surya/Osiris/Apollo) with a distant (67 AU) M-class companion (Agni/Set/Ares) in a 400-year orbit with eccentricity 0.45.

The Royal-Imperial family of the Lion Empire

These are recorded under later system revisions, with a fixed hitpoint combat system

Obviously, the main map can't be transcribed here, but for those with access to the originals, the some cities were named. 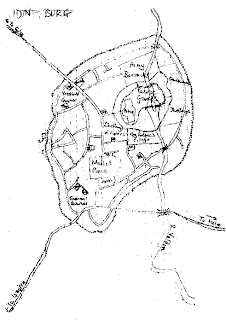 The walled city of Idin-Burg, lying on the river Valdon. Roads lead north to Géra, south to Iszorra and east to Helm. The Royal-Imperial palace is on a mount, surrounded by its grounds running down to and across the river. On the east bank lie the dwellings of the gentry. North of the palace are, the barracks, to the south-west, the noble district and to the south, King Roderic's College. The marketplace is marked by the large coaching inn. By the Géra road is the Kreuzlander quarter, and by the Iszorra road, the Quantari quarter

The campaign used the Pasadena Cleric system, which gave something like (level*(level+1)/2) + (faith-13) prayer points, and casting success was 60% * cleric level * prayer points / (prayer level2), and prayer levels are about twice the spell level one is used to, with magical abilities like turning undead coming in as level 1 prayers. Some high level spells, such as Raise Dead Fully, or Finger of Automatic Death mapped to prayer levels 15–20

The use of the various gods out of Gods, Demi-gods and Heroes ws accomodated by the early invention of specialty priests, assigning Pasadena levels to Druid spells, and portioning the whole ensemble out amongst the various pantheons e.g. from the ever popular Asgardians, Odin priests — Get ESP at prayer 6, 12 elemental summoning at prayer 12, no access to raise spells or their reverse. Thor priests — are split-class fighters, with prayers Call lightning at 5, resist lightning at 6, Control Weather at 10, no reversed spells, no Commune. From popular Olympians, Hermes priests — are split-class thieves, and gain +2″ move, Nike priests gain no curative spells, and have all destructive spells at 1 prayer level easier.

Beat the number on a d20 to parry. Modify by each person's STR based to-hit, weapon/shield plusses and fighter level. The attacker gets the benefits of his to-hit from DEX, and the defender from his AC bonus from DEX.Take -3 on the roll per previous parry this round.

of magical specialty: +5 if one is a specialist in that type, +10 if not (slighlty offsetting the out-of-specialty penalty).

Semi-magical items included weapons made of exotic high-tech materials left over from the in-flight days, with names for the latter fallen days like High Bronze (+3 to hit) or Godsmetal (+5).

Rules for weapon enchantment were simple — pay enough gold, and expend enough spell points (implicitly giving the time involved), e.g. pay an up-front amout to ready the weapon for enchantment (120 each per pound of steel) then pay 1000N of each to boost a weapon from to +N to hit from +(N-1); and another +1000N to boost to +N damage from +(N-1), where damage pluses were never greater than the to-hit pluses, and flat sums extra for each power.

The campaign used a system called Red Book (as it was written in a red school exercise book), an earlier cousin of .DSYS which went as follows:—

Spells take level in weeks to learn to +0; for each extra level weeks, another +1 to a maximum of +3. Each spell has a use bonus, starting at +0, with N successes needed to increase from +(N-1) to +N, failures subtract directly from the use bonus.

Roll 3d6, add the above bonuses, add the number of spell points used (at least equal to the spell level), and subtract points used to customise the spell, and compare against the effect table for that spell. There are no standard success values

This is a typical spell; it only has a few parameters to tweak. Fireball was far more complicated, along the same lines; other spells (e.g. cure paralysis) just had a simple fixed success/failure value.

Power over 25 can be used to belatedly buy customisation but at half the benefit.

Posted by Steve Gilham at 20:47 No comments: