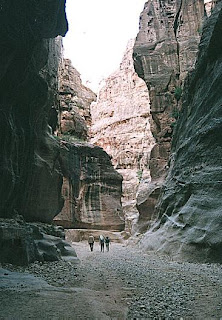 To miss the general election in 1992 we took a tour to Petra, catching it before the peace agreement that let in floods of Israeli holidaymakers. The siq, the passage from modern the town of Wadi Musa to the ruins of Petra, is a dry river bed as you can see here. But in developing it for Israeli tourists, it's now been covered in sand to help ease the route down, and the rest over-commercialised.

Given that Jordan's only oil output comes from olive trees, the lust for hard currency is not surprising, but when the price of entry rockets from 1 dinar (about one pound sterling) to 20 dinars, you can only agree that Petra is now doing what it has always traditionally done, and doing very well in separating travellers from distant lands from their money.

Following 9-11, and Gulf War II, Jordan is again a spot of calm in a troubled region, and is suffering for the troubles of its neighbours. The law of supply and demand has struck — now that Petra, and the other sites like Jerash, are near deserted, the entry price for Petra has almost been halved. '03-'04 may be a window for the adventurous to see the sights without being swamped. 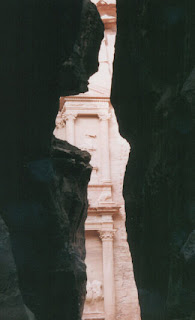 The Treasury at the end of the Siq and from the open area just beyond the Siq.

In the late '90s it would have been swarming with crowds of hawkers, offering everything from Coca-Cola to camel rides. 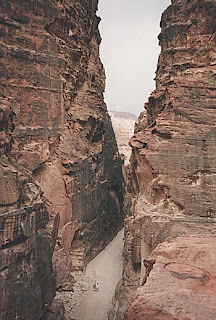 Beyond the Treasury, heading into the center of the city.

Eventually the wadi opens out, and there are more of the buildings, and a Roman amphitheatre carved into the left hand side. Further yet, and the river bed opens into a wide space, maybe 500 yards across, with many more such carved buildings in the cliff sides, bare rectangular boxes behind ornate carvings, with the beautiful texture of the different colours of the sandstone layers often hidden by the soot from where the local Bedouin have continued to camp, despite the government provided housing nearby.

In the open, there are free-standing Roman ruins, a column, and such; and modern work to canalise the river. 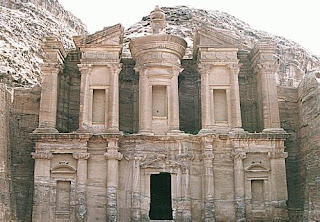 The monastery at el De'ir. They've added steps to the steep climb up to this site, which is on the far side of the open area of the main city; and also up to the left of this structure. When we went there, there were only a couple of the locals in a small carved cave (behind the photographer), selling souvenirs and drinks. My father exercised his rusty Arabic from National Service days, and after being kidded for his Egyptian accent, we were invited to share their lunch — a bannock cooked on the floor, where a fire had been set, and covered with its ash. With sage-spiced hot tea, it was wonderful.

They also did a good line in jewelry, at reasonable cost (only a few dinars for an intricately worked pair of ear-rings), which we bought to show our appreciation. We cringed later when some upper class couple turned up and started haggling over such petty prices "because they expect it, dear." 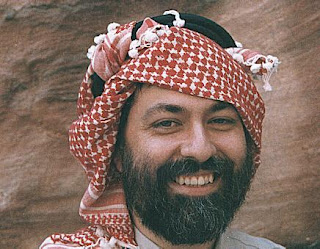 Posted by Steve Gilham at 21:31 No comments: