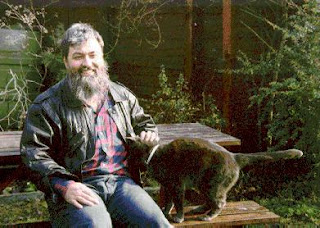 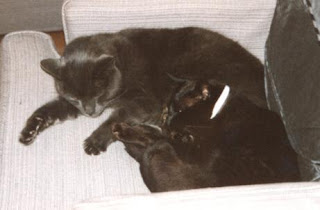 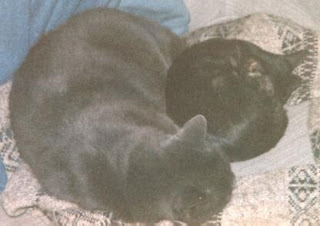 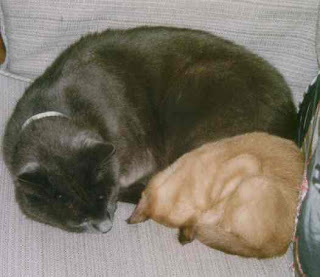 Smoke had a long tenure as the senior cat. He was a generally affable cat, and for all his size (a lean mean eight kilos in his prime, though getting a bit scrawny towards the end due to hyperthyroidism) somewhat unwilling to allow other cats to see that he was a great softy. He allowed other cats to snuggle up to him — here he is with our late lamented brown Burmese, Shen Kuei who was the previous top cat (and thus considered any other cat or person who stayed still long enough a valid hot-water bottle) — and, showing that this was not a fluke, with later Burmese members of the household, Kundalini and Penny, the latter picture being taken less than 24 hours after Penny's arrival. 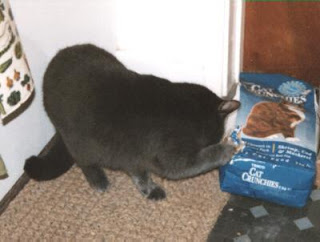 Smoke's favourite food used to be cat biscuit. But as his teeth failed and he got crankier, and always hungry it was just the jelly from lumps-in-jelly, or occasional mouthfuls of senior cat food.

At the end, suddenly, on a mild day after a cold snap, he demanded to be let out. I half noticed his absence when I gave the other cats the end of a tin before we went out to dinner. He didn't show when we got back, so I went out, fearing the worst, to find him curled up under the rhododendron by the conservatory door, cold, but not yet with rigor set in. I guess he knew it was his time.

Posted by Steve Gilham at 20:45 No comments: