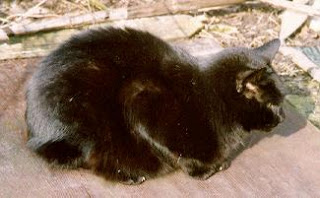 Named after the demon from Tanith Lee's Night's Master who created the first cat (which was of course black) it seemed he would be a permanent fixture in the household.

He was never a well socialised cat, having been born to a semi-feral mother, who was left to rear her kittens undisturbed in a room to herself - he never cared to be handled, was always very timid, and prone to marking out little bits of territory to himself (even indoors, alas). He was also very affectionate, and would dribble while purring ecstatically when stroked, and always wanting to groom the person in return (slobber! rasp! - his tongue was very rough).

He broke a tooth (one of his upper incisors), and found eating painful, and after having the stump removed, quickly went into a decline. Whether the kidney failure that he suffered had been the cause of his problems, or was triggered (or merely exacerbated) by infection of the gums or the anaesthetic for the dental work it's not clear. One problem with an outdoor cat - you can't tell how much they drink.

The picture was taken a little after his 14th birthday.

Posted by Steve Gilham at 20:34 No comments: