PCs from the olden days

My first PC was a fighter, in plate, wielding a 2-handed sword. These things called “kobolds” died a lot when he attacked them, and yielded up a chest full of copper coins. He survived the one delve, including cowering from a carrion crawler, but was never played again. The second character was the only fire-and-forget mage I've run. He died on the way to the dungeon, when a random encounter came up as displacer beasts. They don't Sleep very well…

The first character who went up levels was from my brother's dungeon (early 1977):

The original character sheet (half a coding form from the local computer lab) also contains a hit-list of characters (run by lower VIth formers, and other such vermin) that had sassed her. She had a brother Leon, who was a bard (as per an early Strategic Review), and no discernable character development.

The most significant character (and only one for whom records survive) from the dungeons I ran at the time (again early 1977, with vary variant systems already)

She was one of a family with similar names that my brother played (I still remember the regrets I felt when the oldest of them, her brother Ulric, fell to a carrion crawler in the Hall of Machines…)

The highest level D&D character I ever ran was almost my last ever spell-caster. From Martyn Wheeler's 78-9 dungeon

Ring of invisibility, ring of 7 spell storing (Disintegrate, Teleport and a bunch of Elemental summonings)

Ororo and Cat together

This chaotic good pair chafed rather under the rigid lawful-good senior members of the party (she joined at first when most were at levels 4-5), especially the treasure division system based on xp-hours of delving less value of current items, and the strange ideas about what were or were not fair targets. Having managed to be the one to pick up this staff to try, she adopted a “take it off me if you think you're hard enough” approach, which being at least nine tenths of the law, led to acquiesnces by the lawfuls. Having it, she used it only in extremis (usually to summon elementals as dumb hit-points). She first took damage at about 7th level when a gas spore exploded; and only died once at 12th level, when a ~20th level enchanter lich managed to mass charm much of the party, including the fighter with the vorpal blade. And she rolled an 00 on her system shock roll — but the GM ruled that the number of hit-points her familiar had were enough to mean that she had never really died, and only needed the healing effect of the raise to re-attach her head.

By the end, Ororo's role was combat air patrol (she is the subject of the many of the early memorable experiences catalogued elsewhere), but with the campaign emerging from the dungeon into almost heroquesting, in a cross-planar (from misty moors, to fire, to ice, to the magic garden) expedition to a magical place of power, she finally found something that was a worthy goal. She would perform the quest again herself, to the strange garden of the Crystal Pyramid, and rather than looting the pyramid, perform certain rituals about the sundial that lay between the entrance gates (cast iron, not inter-planar portals) to gather the power to create her own demi-plane, a small island surrounded by the shimmering void. Entered from the plane of ice, it was to be a place of snow covered pine forest, with people of the pines all over. Some 50 miles from the entry, behind a maze of force walls, a valley that was a summer garden, with a little cottage where she could retire.

But the campaign underwent a system conversion to use a different combat system, and the changes in relative character ability that this wrought crashed the campaign. At that point she was the highest level equal (behind the Enchanter, Fortash, who was about to break to 13th).

Posted by Steve Gilham at 23:47 No comments:

This magic system, known to the players as .DSYS, and to others as another instance of “Oh god, the Cambridge Magic System”. WPR is Willpower, another, new, characteristic.

Stats used are INT&CHA for elementalist spells, INT&DEX for illusions, INT&WPR for enchantments and INT twice for general magic spells. Open ended rolling up and/or per species bonuses could result in high stat values (a Noldor elf had, IIRC a percentile roll that pushed 18(00) CHA up to mean 30 and then took a D4 bonus on top of that). At least in some branches of this system the stats used for bonuses were intended to make women and elves potent at Elemental magic.

Wiri were a local “special”; warriors or mages, always Lawful/Good, small furballs with legs. They had reasonable natural armour, but could not wear other armour, and gained one size up of hit dice. They needed some stat minima, and took 5000ep base for warrior, 6250ep base for MU, if I understand my notes correctly. I don't have the full spec, as I never cared to use them.

NOTE: Levels lost cannot be recovered by a clerical “restoration” spell. After an insanity result, the MU cannot cast any spells for a number of days equal to |E+7|

For each second reduction in time there is a penalty of -1 on that cast. If the caster wishes to reduce the casting time below 1 second, a different penalty system is imposed:

The other source of penalties on spell casts is due to the MU 'running out of energy' as he/she casts more and more spells. According to the level of the MU casting the spell, and the total number of spell levels cast already (NOT including the spell about to be cast), consult the following table (sorry, there never was a formula that I knew of): 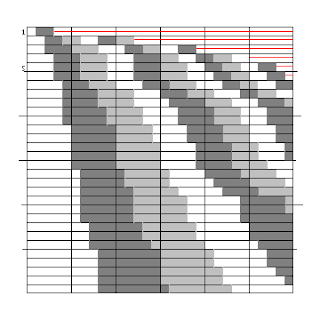 MU level counts down, one band per level, so up to level 30 here, and across (marked in fives of levels cast, so the table runs up to 30 levels cast). The bands are of increasing penalty (zero for white, -1 for dark grey, -2 light, -3 white again and so on). The red line means each spell level cast is an extra -1, so for 1st level caster, the table is 0,1,1,2,3,4... Fatigue recovers in 60/CON hours after incurred.

Generalist spells are things like Detect Magic, Detect Evil, Read Magic, and Dispel Magic. Enchanter and Illusionist spells are roughly the two schools as per the usual spell listings, and Elementalist are all the rest, but the repertoire was drawn from the much smaller pool of spells in the original rules set. The spell lists are too cumbersome to scan in (line printer paper), and a pain to transcribe manually, so only a sampler:-

2) The Healing touch of Fortash

The numbers meant generalist spells were rarely used and out-of-specialty never. Sub-second casting is probably too easy. The de facto need to bring spells down to 1 round or less means that a new spell level is gained every three levels - even MU12s didn't cast higher than 4th level except outside adventures. The system as written also suffered a legacy problem from its ancestors, that using Charm spells to control the minds of others could cause the enchanter to gain WPR, and hence increase his stat bonus, but no other spells had such permanent benefit.

The three-way division of spells worked with the small spell lists of the time of devising (pre-1978), but would need reworking for the bigger lists - I'd started to do that by splitting Enchanter to put the body/life-form affecting spells into a Sorcerer group (CON), and the raw energy spells from Elementalist to Luminor (STR), and evening up the stat bonuses to (INT+req)/3 - 8 rather than use tables - but that didn't address the other flaws.

A cleric has (level*(level+1)/2) + (faith-13) piety points. D20+points used must exceed the spell level. A roll of 1 always fails, and at least one point must be used per casting. Failures have no effect. Spell levels ran from 4 (for things normally given as abilities) through 15 for the normal lowest level spells, up to 50 for the most powerful spells; or to a first approximation, spell level = 10+5*common level for spell.

There was a separate druid system, which combined elements of both of the above, but it was imported from another campaign, and never quite fitted. The idea that system had of making Druids not at all hasty (just like Ents) was that they didn't mesh with sub-second MU castings, and encounters geared to that sort of speed.