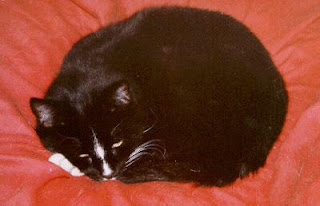 Named after the combat cat from Corwainer Smith's The Game of Rat and Dragon, here she is in her prime, looking suspicious at being disturbed from her beauty sleep by the flash. She was always the most demanding and crotchety of the lot, and it was rare, though not unknown that she would settle with any of the other cats near her. 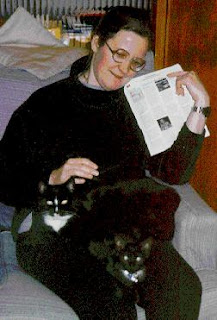 She was clearly getting to be an old cat - you could feel her spine when stroking her - when she was about ten, but continued to be a feisty, wiry old lady, though her once shaggy breeches became rather threadbare, as her coat thinned with age. In the spring on '99 she went in for dental surgery [same practice as Frank the Cat of cathospital.co.uk fame] at the same time as Penny had was to be spayed, and we were told she had a slight heart murmur - so we expected that we might only take one cat home. She turned out fine (Penny took a long time to recover from a chest infection she picked up) By that autumn, when her check-up came we were told it wasn't worth giving her her boosters, as she had a growth in her mouth and wouldn't last much longer.

The growth did eventually begin to interfere with her grooming, so she needed dribble wiping up, and bathing (for which she seemed grateful), but not with her appetite. She remained a healthy eater until almost the end. Even on the last Friday, she was happy to stalk out into the garden to appreciate the fine spring weather, despite being increasingly stiff and a bit doddery. Perhaps she did not approve of Penny's attempts to play tig, and she worked herself into an apoplexy, but the next morning, we found her neatly posed in the study, but unable to move, save for shuddering. She could not walk, and showed no appetite, even for treats, still purred if stroked, but faded quickly.

Posted by Steve Gilham at 20:41 No comments: