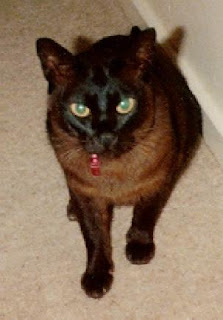 A pedigree brown Burmese, who escaped from a life as a show cat by a sprinkling of creamy hairs (his mother was a cream Burmese) on one shoulder.

He was a very human-oriented cat, having grown up in a household with children, dogs and other cats, and acquired from his mother the art of opening door handles. Even when confronted with doorknobs, or sliding doors, he managed to achieve his intent by leaping up at the knob and then glaring at the nearest person. Very fixated on Karen, he would rarely allow other cats to share her lap (though he would curl up with any other cat if there was no lap available), and would scold her upon her return if she was away for any reason.

Being a pedigree cat, he also felt that he had no need to prove himself. Of course he was the boss; and of course he could help himself to scraps at any time - he often brought home bits of other peoples' Sunday lunch. Indeed, one time he tried walking off with a joint of lamb from our kitchen, and to dissuade him I doused him with the first thing to hand - the glass of wine I was carrying. He was a very squiffy puss when he'd finished cleaning himself up, and had acquired a taste for wine afterwards.

He remained the center of attention to the end, deciding to show the symptoms of a cancer the day before Karen's birthday, and expiring the following day.

Posted by Steve Gilham at 20:30 No comments: