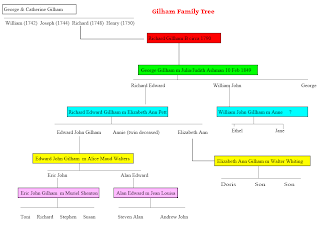 My branch of Gilham family originates from Dover, Kent. The name comes from the Norman French - Guillaume, or William. This is in contrast with the etymology offered by such sources as the Reader's Digest Condensed Encyclopedia, which offered the meaning of the name as "dweller by the head of the glen" - presumably ghyll-hame - which might explain the run of Gilhams along the Great Glen in the latter part of the 19th century, according to the recent trace-your-name display in the Science Museum, if the Auld Alliance does not.

The name is quite a common one (including the -ll and -llh variants) along the south-east coast, from Kent around to Sussex at least, but is otherwise quite rare in my experience. It's sufficiently rare that I've only encountered the name once in fiction (a Senator Gilham in a series of SF stories on the subject of head transplants written R.C. Fitzpatrick, and appearing in Analog in the mid 60's).

On the direct male line, he family can only be traced as far back to the Census of 1881 with any certainty, although the dates of birth can be taken further back as the ages are listed in the census.

Running back, the ancestry combines with the Walters family from North Staffordshire. Both of the early Walters family married Austins, so we suspect that they could have been cousins. From this marriage the progeny moved to London and the South East, and Australia respectively.

A branch of the Walters family strangely enough moved to Dover and created their own dynasty. Their maternal line is also named Austen (spelt with an E); another branch is now living in Norfolk.

So far we can only trace the maternal side of the Gilham family back to the Pett and Wallis family. Other families are noted as they interact with the main streams.

The Australian line needs to be expanded when information is available.

Unattributed ages are those of the 1881 census.

The core of the genealogy I will take as my paternal grandfather Edward John, and his marriage to Alice Walters. His father married a Pett, while my grandmother came from two generations where a Walters married an Austin. Her siblings married a Kemsley (Dover) and a Mountford (East Anglia). Of his two sons, the elder emigrated to Australia, while my father Alan Edward stayed in England.

Elizabeth Ann Pett married Richard Gillham (note the double-l in the name at the time) who was recorded as being 19 in 1881 (born in Dover) and a militiaman stationed in Canterbury at that time.

Richard E Gillham married Elizabeth Ann Pett on the 29th March 1887 and had twins Edward John - my grandfather - and a girl (Annie) who did not survive.

Later they had a daughter also called Elizabeth Ann, who was always known as Cissie, who married Walter Whiting.

Edward John was born in 1889 at 4 Prospect Cottages, Dover. In the 1891 census they were living at 35 Peter St., Dover. Richard is noted as being a Bricklayers labourer, in 1919 he was a builder and later became a member of the Dover Masonic Lodge. 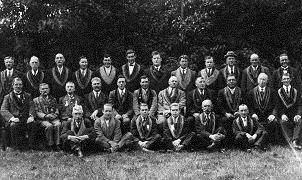 Edward John Gilham married Alice Maud Walters (Christmas Day 1919 in Fenton, Stoke on Trent) He had served in the Royal East Kent Regiment. (The Buffs) from Feb 1908 to July 1919. Returned from India Oct 1914. 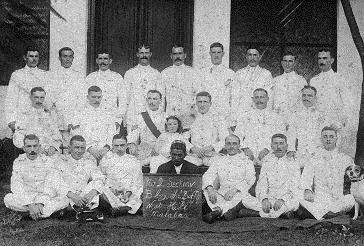 Promoted Sergeant Xmas 1914 then sent to “the Front” ie. France. He fought in the trenches at Ypres and was wounded. He spent the remainder of the war in charge of the Army Post Office in Marseilles. Alice was a nurse and served in the military hospital in Kent.

It is interesting to note that on my grandparents marriage certificate that Harold Mountford was a witness. He married Alice's sister Gladys.

James was born in Burton on Trent on the 21st October 1869 and is recorded in the 1881 census as living at 9 Gladstone Street, Stoke on Trent. There is only a picture of Hannah and her family with husband Charles who was an interpreter in the Army, branch unknown.

James Walters married Harriet Ann Austin in Normacot, Longton, Stoke-on-Trent 27 Jan 1889, both aged 21years. In 1881 they lived at 33a GregoryStreet Longton with Alice Maud then aged 11 months, giving a birth date for her of 20th April 1880. They had two more children Gladys and Fred.

Gladys married Harold Mountford (a miner) and had two daughters Freda Patricia and Christine, known as Chris. Gladys later remarried to a George Perry. There was no further issue.

Freda married Reginald Hunter and had a daughter, Patricia. Freda became a sergeant in the ATS during the war. Reg was a “Bevan Boy” and worked in the coal mines. Now (mid-2003) resides in East Anglia. Chris married Shearer Macintosh (known as Mac) in 1953 and died in Scotland (Burntisland) in 1998.

It is possible that the Salt family of Dilhorne, near Stoke, has some connections with this branch of the family.

Fred Walters married Ada Kemsley, born circa 1900 in Gillingham and died aged 98. They lived in Dover at 2 Redvers Cottages, Kearsney They had one son and two daughters. Len, Gladys and Joan. By a strange coincidence the mother of Ada Kemsley was also an Austen but this time spelt with an E.

Fred was Company Sergeant Major in the 2nd Battalion on the Royal East Kents (The Buffs) during the war.

Gladys married a Mr Smithson and later they emigrated to South Africa and then Australia.

Joan married Joe Adkins; there was no issue.

They were both stationed in El Adem (Libya) when my father, Alan Gilham landed there in 1948 en route from Tripoli to El Fayid (Suez Canal Zone) as part of his National Service.

Len married Edie Dixon and had a daughter Carol and a son James.

Len served in the Royal Artillery and took part in the Burma campaign. Edie was a “clippie” on the buses during the war. The Dixon family took part in the Dunkirk evacuation using small fishing boats.

He was a wireman with London Transport and she was a secretary with the Ecclesiastical Insurance Office. He later became a Chartered Engineer (in electronics engineering), and finished his career in electronics sales, while my mother became maths teacher when her children were old enough for her to return to work.

Alan served in the Royal Signals (National Service) in the Middle East. Alan later spent two and half years working for NASA in Carnarvon W. Australia. They had two sons Steven (yours truly) and Andrew.

They both graduated with MA Cantab. in the Mathematical Tripos after reading maths at Emmanuel College Cambridge. Steven also gained an MSc in Astrophysics - like Trilian from the Hitchhiker's Guide to the Galaxy, really, only not so glamorous.

Andrew John Gilham was born at home in 194 London Road Morden Surrey (my earliest memory is of that day), and followed the same course of schools and undergraduate degree. He now runs his own computer consultancy.

Steven Alan Gilham married Karen Alison Edwards in 1981. Karen is a King's alumna, with MA Cantab. in Classics, and a Post Graduate Diploma in Classical Archeology and is now an FCCA. Being childless by choice, this branch of the family leads no further.

They emigrated to Australia in 1951 and became naturalised Australian citizens later on. Muriel already had one son Toniand later they had two sons and a daughter, Richard, Stephen and Susan, all born in Australia.

Toni married Judy They reside in the Northern Territory.

Christopher married Kath and have (at least) a daughter, Caitlyn.

Stephen married Margaret Hopley and they have two daughters Sandra and Kerin. They live in Traralgon, Victoria.

Susan married Philip Robertson. They have twin girls, Lee and Ellen. Susan is a nurse and has worked with the Flying Doctor service. Philip is now the Clinical Nursing Manager at the Royal Melbourne Hospital.

This is just the start of an Australian dynasty, so the continuation of the name seems reasonably secure. It will be interesting to see how all the all relationships and families have grown by mid-century.

Recent data are redacted for obvious reasons. Research along this line has been more fruitful, reaching as far as my great4-grandparents in one place.

My maternal great2-grandparents and their antecedents

The hard work that went into this was done by my parents for the Gilham line, and my aunt Joan on the maternal line. Thanks to them all. 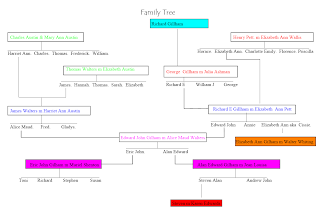 I love the way you are honouring your ancestors through this.

Steve,I was trying to do some research about the Gillham Family. The only thing I know about my father is his name Bedford Ray Gillham b. 19340915 d. 20041101. I was curious if you knew anymore about the Gillham family history.

Not a name I recall (most of the names in the tree I have are taken from the Kings of England), but I'll have to pass it around to others in the clan, to see if we have got that branch.